How long until modern day dads are working 2 to 3 days a week?

We're thrilled to share this fantastic piece by Han-Son Lee, founder of Daddilife, a leading parenting website for dads. Han-Son explains why flexible working can't be seen as an issue for mothers only, and the importance of enabling flexible working for dads too so that the modern day family can thrive.

*Editor's note. We had planned to publish this piece prior to the COVID-19 pandemic, but the delay to publishing has shown that this is an even more important issue now. With talk of an economic crisis larger than we've ever seen before, which is expected to affect more women than men, plus the fact that businesses that had previously refused flexible working have had to fully embrace it, we need to keep moving forward when it comes to enabling flexible working for everyone.

Flexible Working. What does that term mean to you? For many years, it has become an area that has predominantly been seen as 'mums-only', and it still suffers from both the perception of being ‘less work’, and in the availability of genuinely flexible jobs. Thank goodness for platforms like 2to3days!

But a new dawn is arriving - quickly - and it's being powered by modern day dads. A new generation of parents are becoming far more equalized when it comes to their parental activities, and it’s this true parental balance that’s starting to occur more and more at home.

87% of all the dads we surveyed in our Research Programme with Deloitte, The Millennial Dad at Work, said they were actively involved in day to day parental tasks, with almost 6 in 10 (58%) being fully equalized with partners.

This generational change for dads is starting to shape services in a totally different way – from dad focussed play groups, through to the advent of new products like dad changing bags!

But there’s one area we now need to shift through the gears if we’re going to realise the full potential of this change…at work!

Dads at Work | The battle ahead

When we surveyed over 2000 working dads for our Millennial Dad at Work research programme we asked dads about a number of areas when it comes to their work life.

Overall, only just over 1 in 2 dads believed that fathers as a whole in their organisations were treated equally to mothers in regards of flexibility. 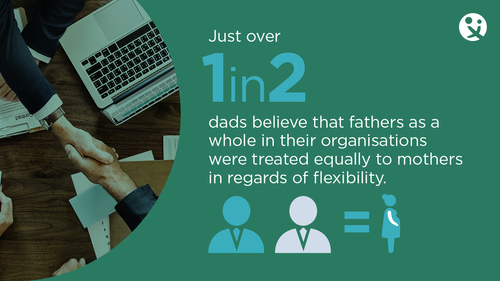 When it came to what dads were requesting for flexible working vs what was being granted, the following puts the challenge ahead in even more stark terms.

As stated earlier, this is a generational shift, and much of this tension still lies with the differences at work and home between different generations of fathers. 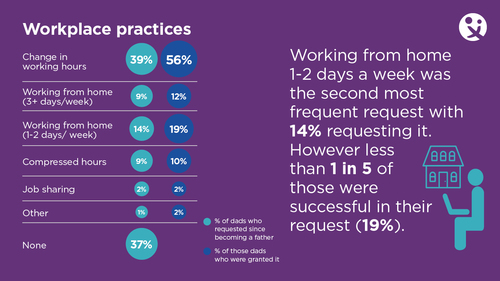 However, even with that said, unless we improve the numbers of fathers who are able to work 2 to 3 days a week (whether at home or in total), then we’re not going to move the dial for all parts of the modern day family to thrive. It’s something that all industries – new and old – should be waking up to.

There’s a role for both employers and the fathers themselves to play in making this happen.

What employers need to do:

What dads need to do:

If you want to help keep gender equality at work moving in the right direction, please take part in our survey about how organisations have managed their people through lockdown