Gender Diversity In The Workplace – Why Men's Work Life Balance Matters to Everyone.

How can we really shift the dial on gender equality? Ian Dinwiddy, founder of Inspiring Dads, explains why men's work life balance matters to all of us, and why flexible working has to be for everyone.

The world is full of expectations and pressures - men's experiences are no different to anyone else in that regard, and in many ways men have it easy in the workplace.. Men tend to be good at behaving in a way that is expected of them - ambitious, driven, and competitive.

However, in workplaces dominated by men it's easy for this way to become the only way of doing things, creating self-reinforcing behaviours about what success looks like and how it is achieved whilst relegating other traits.

Successful men tell me about the pain of comparing their career trajectory with that of their peers on LinkedIn, but unable to admit to anyone about what they really want.

Torn between who they are truly are and the mask they project as they seek to fulfill their destiny as a provider. There's a collective silence around what men really want, and it takes real courage to open up and find a different path.

The challenges facing men get magnified when they become fathers...

The challenges of fatherhood

Enthused with the higher purpose of fatherhood, men quickly face the tension between the roles of Breadwinner and Carer, and after two weeks of 'holiday' - paternity leave - find themselves pulled in different directions.

Nearly 80% of dads feel a responsibility to be “the rock” for their families after the birth of a child, and half say this is a struggle, causing them stress and anxiety.

Couple that pressure with a reluctance to seek out help and it's no surprise that men identify issues with stress and burnout.

And, perhaps surprisingly, the Journal of the American Medical Association found that 26% of men around the world showed signs of depression between three and six months after the birth of a baby.

It would be easy to dismiss these challenges with an attitude of 'welcome to the club, now you know what women face'. But that would be to miss out on a huge opportunity to change the conversation about work, family, and flexibility.

What do dads want?

In short to "be a great dad and have a great career". Exactly what that looks like is different for everyone and every family, but here are some ideas:

GQ magazine found that the number one aspect of modern masculinity, identified by 66% of respondents was ‘being a present father’. While 11% of men have refused a new job and 10% have said no to a promotion because of a lack of good work life balanced opportunities. A workingdads.co.uk survey found that 73% of dads are considering searching for a flexible job and 16% are actively looking for one but 72% fear their employer’s reaction if they asked for flexible working.

Why does any of this matter to women?

A tale of two candidates

Imagine a job situation with two identical candidates, one male and one female. Both in their 30s, both getting married in this year. Think about the effect on unconscious bias if no one knows which candidate may take extended parental leave, or access flexible or part time work. 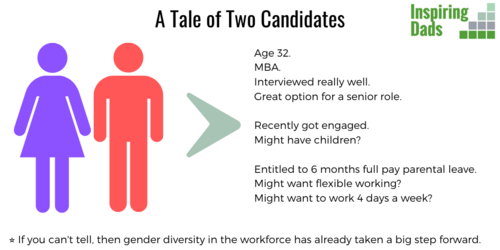 Assumptions about the role of men and women in child caring activities start early; men are identified as leadership material, in part because they are perceived to be a better bet for long term 'commitment' to the business. With men on average already earning more before couples have children, pragmatic financial decisions mean that it often stops being financially viable for mothers to return to work.

With most dads taking only two weeks paternity leave - the lack of take up of shared parental leave has been well documented - and a lack of widespread flexible working, they don't build the bonds or confidence often necessary to take a lead in childcare. The cycle continues - we assume women will be the lead carers, we discount their pay or restrict their opportunities, and those men who might break the cycle by taking shared parental leave or seeking out part time aren't supported culturally or financially.

Equality in the household and it's good for kids too

In households where men were given the opportunity to use this benefit, fathers’ daily time in household work was 23 percent higher, long after the leave period ended. The benefits this gives to household labour equality cannot be underestimated given that according to the New York Times, "at this rate it will be another 75 years before men do half the work". Furthermore, in couples with children, if one parent can't be flexible at work, flexibility to support caring responsibilities becomes a requirement of the other partner's return to work, reducing choice and opportunities for career progressions - a challenge that disproportionately falls upon women.

The benefits are for everyone

If we are going to make the working world better for all parents there are a number of things we need to consider:

A focus on men’s work life balance is good for

Supporting men's desire to be active and engaged fathers, accessing parental leave and flexible working opportunities matters to women because unless we change the prevailing culture that assumes men will take on the breadwinner roles and women the caring roles, we will all continue to suffer.

Women need allies and modern men tell us they want to be those allies, so it's time to make it happen.

If you want to help keep gender equality at work moving in the right direction, please take part in our survey about how organisations have managed their people through lockdown